Oh boy is this is going to be an interesting one. So remember before how I was saying that TV technology seems to advance at a rate that’s nearly impossible to keep up with? Well that’s proving to be truer & truer every single day.

I mean think about it; just within the last 5 years even, we’ve seen the likes of 4K, High Dynamic Range, IMAX Enhanced and extended color go from publicly unknown, to essentially mainstream in the blink of an eye.

What makes it even more surprising is the fact that these aren’t minor upgrades either; each one is a groundbreaking advancement in it’s own right.

However when combined, together they provide for an experience that transcends explanation.

So with that, you would think industry leaders have pretty much done it all when it comes to display technology right?

Well…..not exactly.. because here’s the thing; 8K TV is coming.

The History Of 8K

As hard as this may be to believe, the thought of expanding to 8k resolution started as early as 1995 by the company NHK. For those of you unaware, NHK is a Japanese company that places an incredible amount of emphasis on innovation.

Because of this and unbeknownst to most, they’ve been at the forefront of technology for quite some time now. Be it 3D audio, high resolution cameras, etc, they were always one of the firsts to conceptualize it. However creating a concept, and actually executing an idea are obviously 2 different things.

So even though work started in 1995, it wasn’t until 2002 where it was first demoed (which is still insanely early)

2007 was the year where things really started to materialize as it was finally standardized as an official video format by SMPTE (Society Of Motion Picture & Television Engineers) with the interface later being standardized in 2010.

Here’s a full timeline on 8K if curious.

So with all this talk of 8K, what exactly is it?

Well to put it simply, 8K is a resolution that consists of 7680 pixels horizontally, and 4320 pixels vertically.

Basically you can think of it as having 4 times the total pixels of current 4K TVs, and a whopping 16 times the resolution of HDTVs.

It’s twice the resolution of 4K.

To give you an idea of how high of a resolution that is, you could hypothetically take an in 8K image, do a 2x zoom, and still have a 4K image.

Talk about a lot!

Why Is 8K Necessary?

If you haven’t witnessed 8K for yourself, it’s likely that you’d be poised to think of this high a resolution as a bit much.

While I would have to partially agree with you (at least for now) there’s actually a surprising number of real world benefits where 8K would actually be a welcome addition.

One really big advantage to having a screen resolution this high is that individual pixels become indecipherable to the human eye, even when viewed close up. A common issue with larger displays is that the larger you go, the blurrier an image gets at the same distance.

The reason for this can be attributed to the fact that the same ratio of pixels get spread over a much wider area as you go up in size.

What 8K would allow for is bigger screens having a much higher pixel density; dramatically improving picture clarity and detail all around since there’d be more pixels to better represent the nuanced details in the image.

That’s a major win, especially if movie theaters were to ever adopt the format. Going to the movies would be an entirely different experience all together if that happens.

Another thing that you may not be aware of is that 8K could give a measurable clarity boost to current 1080p and 4K resolutions.

Through something called down sampling. To put it simply, down sampling is a method where something is recorded at a higher resolution and then formatted to be played at a lower one.

By doing this, a lot of the original information of that higher resolution is kept.

As a result, the final image, along with other small details, are made much clearer than they would be otherwise at that same resolution. Here’s a good video that goes over how that’s done if you’re curious.

By recording content at 8K, 4K (and even 1080p) movies would look dramatically better than they already do.

The best part about it is you wouldn’t even need an 8K screen to benefit since film directors/engineers would be the ones to record it and format for current displays.

First off if you’ve never tried virtual reality, I’d highly recommend doing so; it’s mind blowing. But a common restraint on the technology as it sits currently is that it simply can’t provide a high enough resolution to give a 1 for 1 likeness with real life.

This is because the pixel density that exists in current headsets comes up short since it has to be divided between both eyes. This is how it creates that sense of full immersion.

The problem with this though is that it can result in the image quality appearing grainy due to the lack in resolution, and can sometimes attribute to what’s known as the screen door effect.

Like the name suggests, it’s an occurrence that sometimes afflicts VR headsets where it feels like you’re looking at things through a screen door.

Even with a bump to 4K VR (which surprisingly exists) that feeling of clarity still isn’t there since it has to again, be divided between 2 eyes; effectively making it 2K.

With a massive jump to 8K, true 4k virtual reality would be made (for lack of a better term) a reality since you would be getting the full 3840×2160 per eye.

This would not only help mitigate the screen door effect, but also make the experience feel that much more immersive as a whole because of that increase in clarity.

As an interesting sidenote that shows this isn’t too far away, the company Intel was originally planning to stream the 2020 Olympics (delayed until 2021) in 8K VR over 5G.

Yeah. I can’t even fathom what that would be like either.

Whether this is still the case remains to be seen, but it just goes to show that 8K isn’t as far off as one might think. Something interesting to note is that 8K cameras are actually already technically available.

Like most technology that usually start as limited tech demos before becoming commercially viable years later, they aren’t as mainstream as 4K cameras as of right now, but they do exist.

The question is what benefits does 8K bring when it comes to photography?

Well a major benefit for photographers is that 8K would offer more true to life images with impeccable amounts of visible detail that might be otherwise lost at a lower resolution.

This is also especially helpful for those not only interested in editing photos, but in video editing as well since the increase in resolution helps with bringing out additional details in the frame that wouldn’t otherwise be as noticeable.

This can also help with being more accurate as well.

For example, lines that were blurry before would now appear clear, allowing you to more accurately edit your image the way you wanted.

Here’s an interesting article on that if you were interested in that aspect of it. https://nofilmschool.com/2018/02/beauty-8k-large-format

Here’s something you may not have realized, humans can decipher image resolutions higher than 4K. In fact, human vision has been said to be the equivalent of…(drum roll) 8K!

8K seems to be the upper echelon of what we can accurately distinguish; anything higher reaches a point of diminishing returns.

So with a resolution this high, content will finally be able to closely match our own visual acuity.

This would allow for content to feel even more immersive as it would closely mirror how we’d see things if we were actually there.

More on that here if curious. 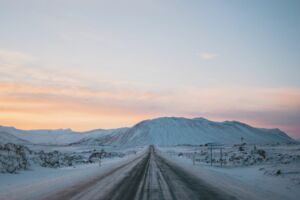 The dramatic increase in resolution that 8K provides also has increased benefits for color accuracy as well.

Think about it; instead of having 1 pixel to display the color blue for example, you now have 4 pixels for that same color as opposed to one.

This allows for much more subtly in color gradiation and helps to minimize banding even when compared with a 4K resolution; thus giving a more vibrant and believable image.

When Will 8K Be Available?

Here’s the real question, when will it be available?! The answer to that is a little complicated since it technically is and isn’t available at the same time.

The reason I say that is because on one hand, there are already companies like Dell and Nikon that sell 8K monitors & cameras available to the public right now. I mean heck, even Sony demoed their own 8K TV in 2018.

Samsung also recently released their own commercial line of 8K televisions that start at 65 inches in size.

It even supports Samsung’s QLED technology so no doubt it likely looks incredible; especially considering Pocket Lint sung the praises of an earlier model.

Even on the projector side of things, there is even an 8K projector that exists.

The issue with all of that being said though, is that the mass switch from 1080p to 4k broadcasting hasn’t even happened yet (though that actually is in the works finally)

Until the switch to ATSC 3.0 is finalized (which is the name of the switch to 4K resolution cable) and they can then turn their attention to 8K, we won’t see it for quite a while.

The infrastructure has to be built for it, which will definitely take time to say the least.

If we’re talking about when you’ll be able to buy the first 8K TV or monitor, then you technically can right now since Samsung, LG, Sony, and even DELL already have them available for purchase.

Even the new Xbox Series X and Playstation 5 will have 8K support which is pretty incredible, especially from a gamer perspective (highly looking forward to those)

But if you’re wondering when 8K will go mainstream with a good amount of content, then my honest estimation is at the very least a decade.

Some might think it could happen sooner than that, but with the amount of things that would need to be done for that to happen, I can’t see that as a valid possibility. I’d love to be wrong though, because it’s an amazing idea.

But the fact remains that the networks still haven’t fully switched to even 4K.

So as much as I want it to be a major format sooner due to what it has to offer, it’s more likely than not that it won’t happen for a good 10 or so years in my opinion.

While I actually have yet to see 8K in person, I have personally seen 5k and 6K.

Truth be told, It was nothing short of absolutely amazing. So to picture something even higher than that is hard to wrap my mind around honestly.

In any case, while it may not be as soon as we’d like, it will eventually become the de-facto standard at some point in the distant future. When this does happen, the world of media will be drastically different from how it is today.

But the real question is, will this be for the better or worse? Like most things in life, only time will tell.

Just remember, even though it’s not popular now, without a doubt 8K TV is coming. 😉