What Is Sling TV & What Makes It Great

What Is Sling TV & What Makes It Great

If you’re relatively new to the home theater sphere or even home entertainment in general, then chances are there’s quite a few gems out there that you may not be familiar with yet. One cool thing that I came across though was the concept of media streaming devices.

Now if you’re building your home theater system then you’ll inevitably come across talks of these along with the unique services they offer like Netflix, Hulu, etc..

But before we take a look at a particularly awesome service that I think you’ll like, first off what is a media streaming device?

For those that are unaware, a media streaming device is usually a device connected via USB, Ethernet, or HDMI that when connected to your television, allows you to stream your favorite movies and TV shows.

Some are rather basic, but the more elaborate like the Fire TV Stick with Alexa Voice Remote and Roku Ultra are entirely controllable by voice.

They’re typically not too difficult to setup, but again each one is different. Speaking of the Roku, I’ve actually covered it in another article if your curious.

What Is The Roku?

By now though you might be asking, well then what is the best streaming service and more importantly, why?

While I would be hard pressed to commit to my absolute favorite (more movies, more problems) I can tell you about one of my more recent favorites, Sling TV, and what I personally feel makes it pretty downright amazing.

Catchy Name, But What’s It About? 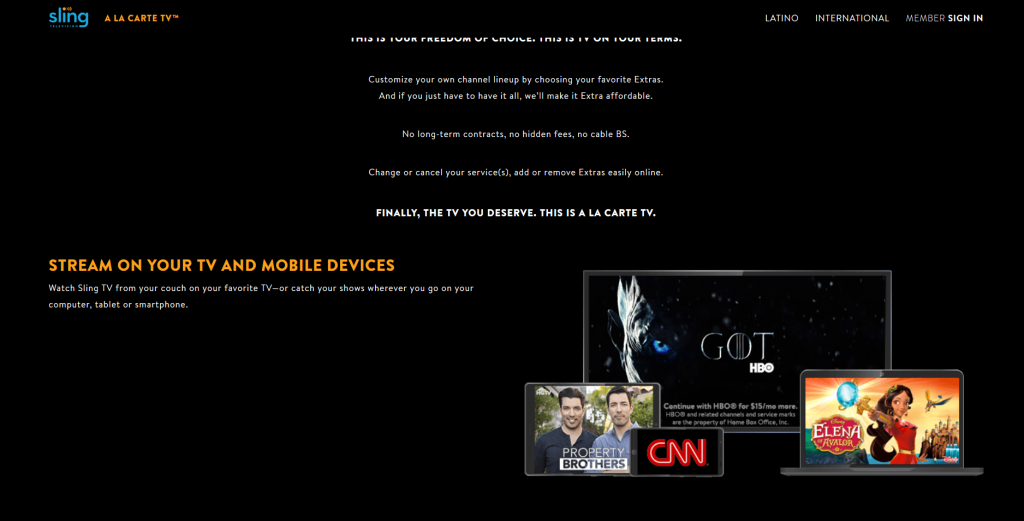 So besides the interesting name choice, first off, what exactly is Sling TV? Well Sling TV is a streaming service that was introduced around early 2015.

Now what made this so incredibly different was that it had a primary focus on live TV, rather than the more traditional streaming.

This was a very novel idea because it was something that wasn’t being done at the time. While most are focused on media that is prerecorded, this was introduced with the idea of being able to stream live TV shows.

Not just live TV shows either, but live television channels like ESPN, cartoon network, etc as they’re being broadcast normally.

That’s part of true the appeal of Sling TV, because it allows you to watch live TV at any point in time; meaning you can even watch on the go be it via mobile or tablet.

It also includes recording and playback capability for things you may have missed as well. Now there’s obviously some limitations with it so let’s get into that.

One thing it doesn’t do is play every channel. Then delving even further, the types of channels that you do get, depends on which subscription option you choose. It offers blue which is the lower tier option with less channels, and then the orange service which offers more channels.

Then you can add other specific channels that they offer depending on your preference. This would be a monthly subscription with the amount depending on what you chose. It offers a 7 day free trial too if you want to test it. 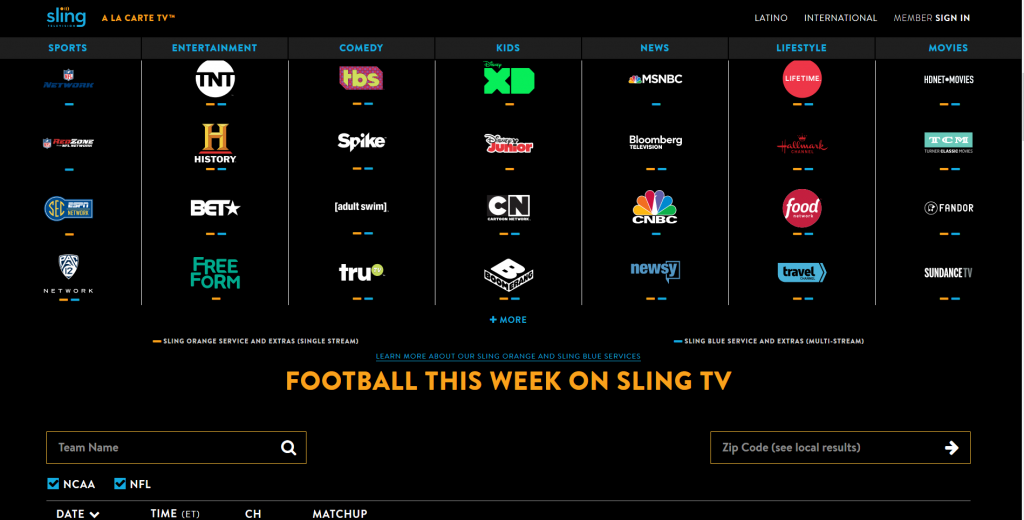 How does it actually work though; and more importantly, how do you use it? Well for one, you’ll obviously need some sort of Internet connection.

It doesn’t have to be lightning fast, but it generally should be at least decent.

If you’ve streamed video over your internet before without it buffering then you’ll be perfectly fine.

Unlike cable companies which broadcast through satellites and wire routes, this is entirely over the internet which is why I make mention of your connection.

This type of service by the way is called OTT; or in other words, Over The Top service. It’s supported on most major playback devices with the only one not supporting it being the PlayStation (they have their own service called PlayStation Vue).

So other than that, if you wanted to use it, all you would do is use the native Sling TV app (or the web page) and go from there. On the basic plan you can stream on one device, and with the upgraded plan, you can stream on 3 devices simultaneously.

Why It’s Worth it

I think this is a pretty nifty (yeah) little service though for a number of reasons. Think of it this way, lets say you recently got a new place and money was something that was already tight.

The cost of cable can be exorbitant and even then, how many channels do you actually watch?

Would you want to pay for something you only use half, or maybe even less of?

With this you can choose the channels that you want at your own discretion, meaning you’ll get the most out of it since you’ll have the ability to only watch the things you want.

But here’s the real question, could it be something that could replace a cable service for good?

Absolutely, especially if you’re someone on the go who might not be home all the time which actually brings me to my next point; the flexibility of it all.

Again let’s imagine you’re a super busy person who gets an occasional break every once in a while and you want to watch TV on your tablet or phone. With this, it lets you do just that. 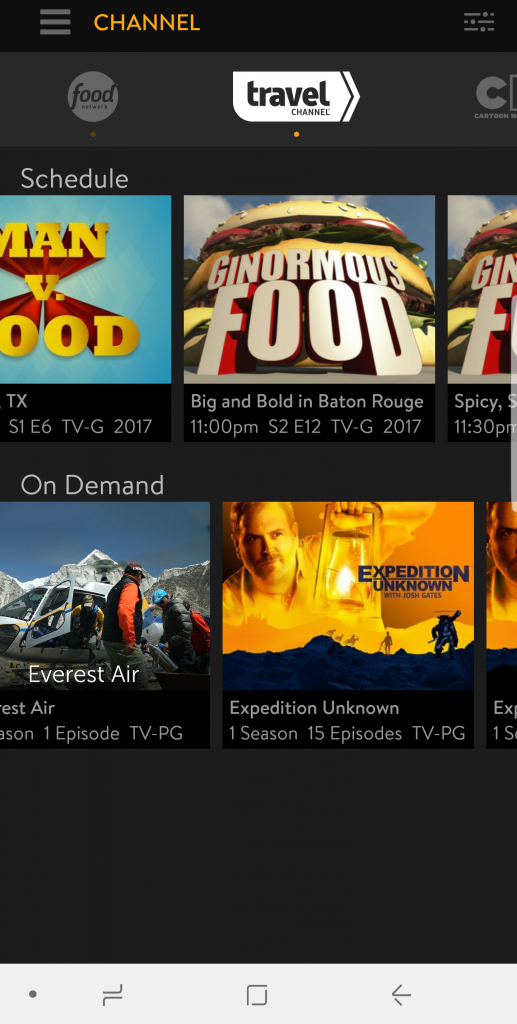 It’s such a convenient option for the people looking for only a select few channels that don’t really want to go the full blown cable route. The number of channels being limited only to what they offer mind you, but I think they have something for everybody honestly.

It’s extremely customizable. You could use it as a supplement to your current cable service, or use Sling entirely by itself, up to you really.

Having a certain level of included DVR capability with live TV shows is also a big bonus.

However there are without a doubt, a few things you must know beforehand as I wouldn’t necessarily go as far as to say it’s for everybody. 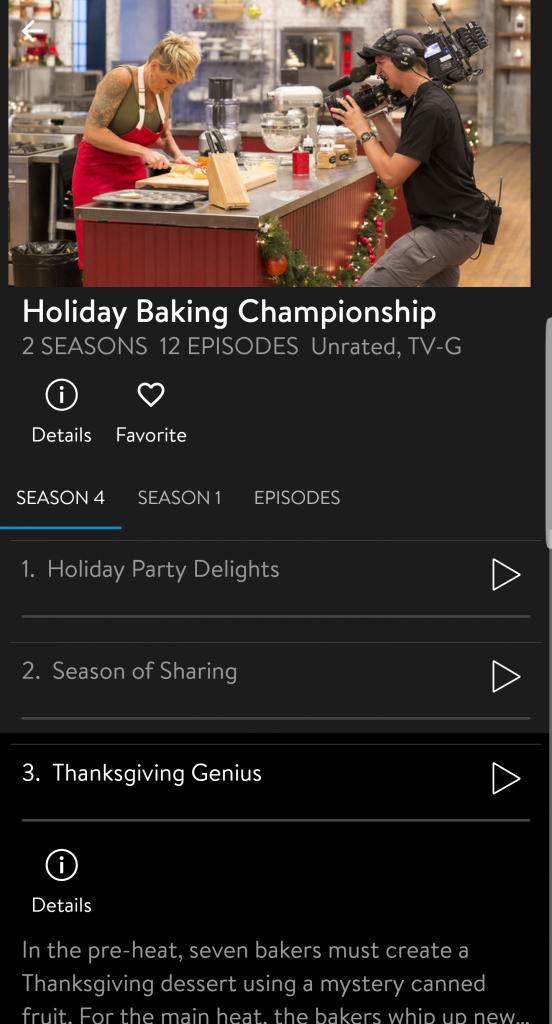 Who It Might Not Be For & The Bottom Line

Who might it actually not be for? Well for one, a really big caveat is that Sling TV is only available in as of right now, The United States.

While they do offer a few channels accommodating other languages, the service itself is only available in the states. So if you’re in another country, you won’t unfortunately be able to use it.

Whether this changes in the future though truthfully I have no idea.

The next reason it could possibly not be for you is if you have a shoddy internet connection. It goes without saying that if your connection is bad, you’re not in for a good time. It’ll likely stutter, skip, etc so you’ll want to make sure that your connection is solid first.

Yet another reason this may not be for you is something I found out myself. With as much as I like this service, it’s pretty selective sometimes.

What I’m talking about is that with the channels they do have, not all programs on that channel are broadcast. A certain show or movie may be omitted occasionally.

Speaking of the channels themselves, those are always changing too. Something they have today may not be available in the near future. Why this happens, again I haven’t the slightest clue, but it’s something I figured I’d let you know.

If you’re someone who’s generally picky, and you like the feeling of perusing through hundreds of channels, then this might may not be for you as well; there’s certainly much less than that.

The bottom line though is that if none of those apply to you, and you’re someone who likes the idea of being able to access live television anywhere, you might want to give it a look.

For me personally, I find it really useful, so I just thought I’d share it with you.

Definitely try it out though, and let me know what you think in the comments down below.

Until next time, make it easy, keep it simple. 😉