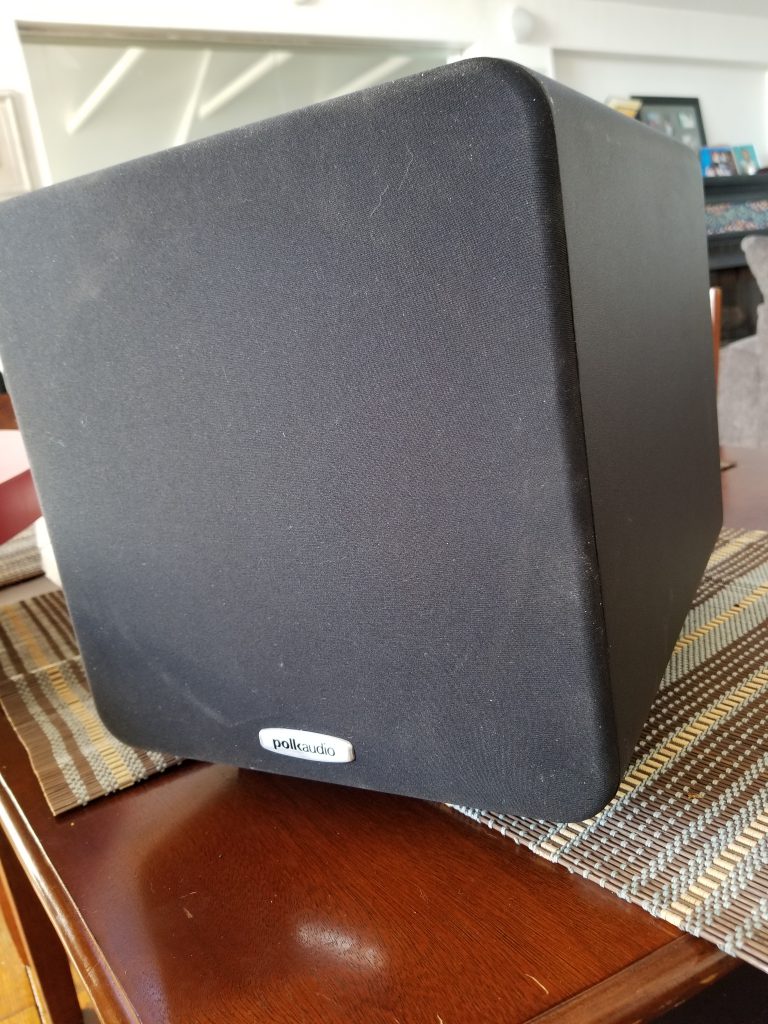 I just want to preface this by saying that I’ve been waiting to do a review on this thing for quite a while, but never got around to it.

Mostly because I moved recently, and couldn’t actually find it until now lol.

So crisis averted, the review is back on! Now the way I actually got this particular subwoofer was pretty interesting though.

What happened was at my job a few months back there was a huge yard sale where I just so happened to go take a look.

Now I don’t know about you, but I love a good yard sale; you never know what you’ll find.

So imagine my surprise when I’m looking around and spot speakers at the end of this one table.

Unfortunately, they were just normal computer speakers. Behind them though was more audio equipment, and that’s when things got interesting. I see home theater speakers, receivers, and all kinds of cool stuff.

Long story short I end up buying a receiver, subwoofer, speakers, and a sound bar. So that’s the focus of today, that particular subwoofer.

This is the Polk Audio PSW111 subwoofer review. 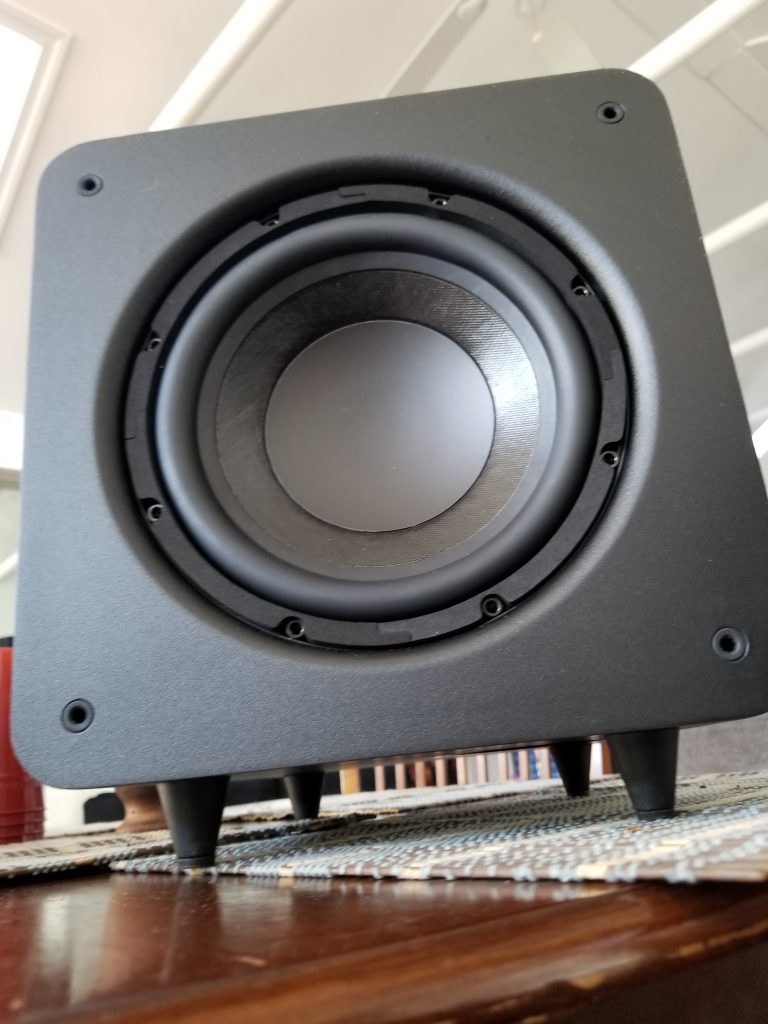 So usually what’s common with subwoofer reviews is that they like to make mention of what type of box that it came in along with stuff like that. Unfortunately though, I would have no idea of knowing what type of box it came in since I didn’t exactly buy it at a store.

So we’ll move onto the aesthetics aspect of it. First impression? Well it’s actually pretty small.

It’s only 11 inches wide, and about a foot tall so if you were worried about it taking up ungodly amounts of space then don’t worry. It’s in an all black finish, and has 4 rubber feet on the bottom.

That’s so it doesn’t go dancing across your hardwood floor/ annoy the neighbors under you during your 2am jamming sessions. It’s made of MDF wood which I like as well. 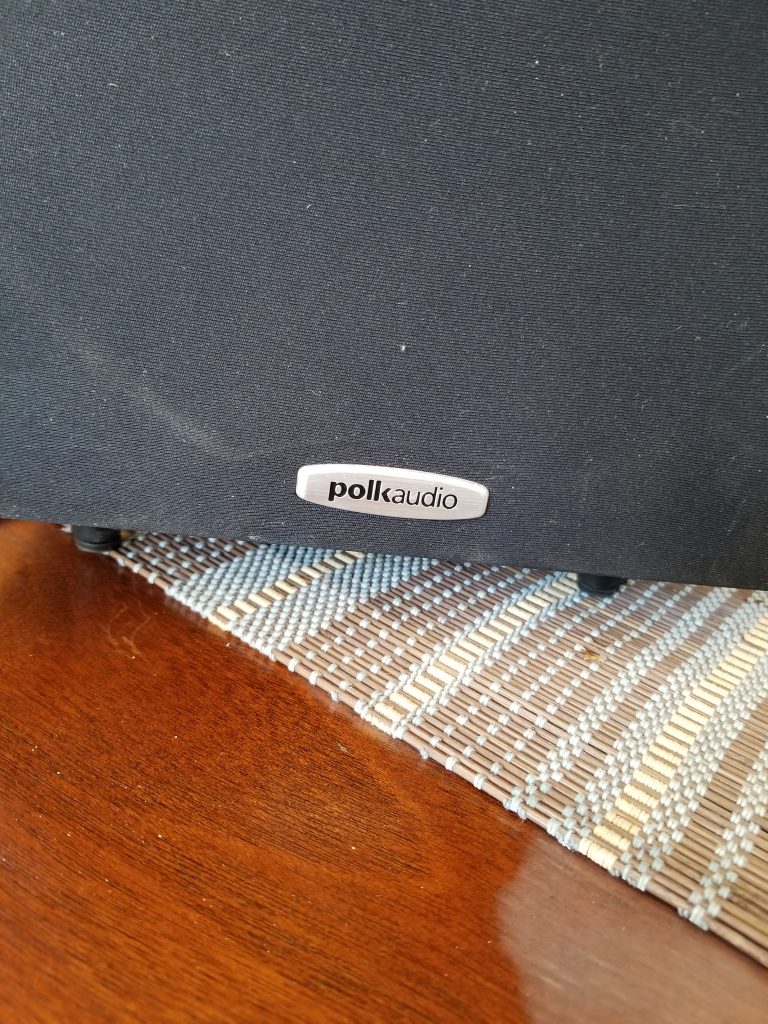 For those unaware by the way, MDF stands for medium density fiberboard. What that is is a combination of wood and resin pressed together into a very solid object.

Reason why this would be important is due to the fact that when a speaker produces sound, it vibrates.

That extra vibration can change the sound output from the driver itself. Being made of this material dampens this vibration tremendously so you get a much cleaner sound.

One the thing that did take me by surprise when I first got it though wasn’t its compact stature, but its weight!

Even though it’s a little guy, this thing is a slightly over 20 pounds! Definitely didn’t see that coming but it just adds to that premium feel.

Speaking of which, the grill in front is simple with the small Polk emblem on the bottom. It’s also completely removable. The material on the front feels thin but strong if that makes sense. Up to you whether you want it on or off.

Then on the bottom you have a downward firing port that helps with an extra level of clean, powerful bass.

Overall though, it’s an attractive exterior and gets a thumbs up.

Just to reiterate with regards to the specs, it’s MDF and comes in at 12 inches high and 11 inches wide (also 13 inches deep). It has 150 watts of continuous power and a 300 watt peak while being Kippel optimized. This is allows it to remain distortion free, even at the highest volumes due to specialized internals.

It has an 8 inch driver as well. The frequency range goes from 38 to 250 HZ which is respectable. It also has a low pass frequency control which allows you to control the crossover from the sub.

Honestly I would recommend setting this all the way to the right because that would let the receiver process the sound rather than the sub trying to do it. 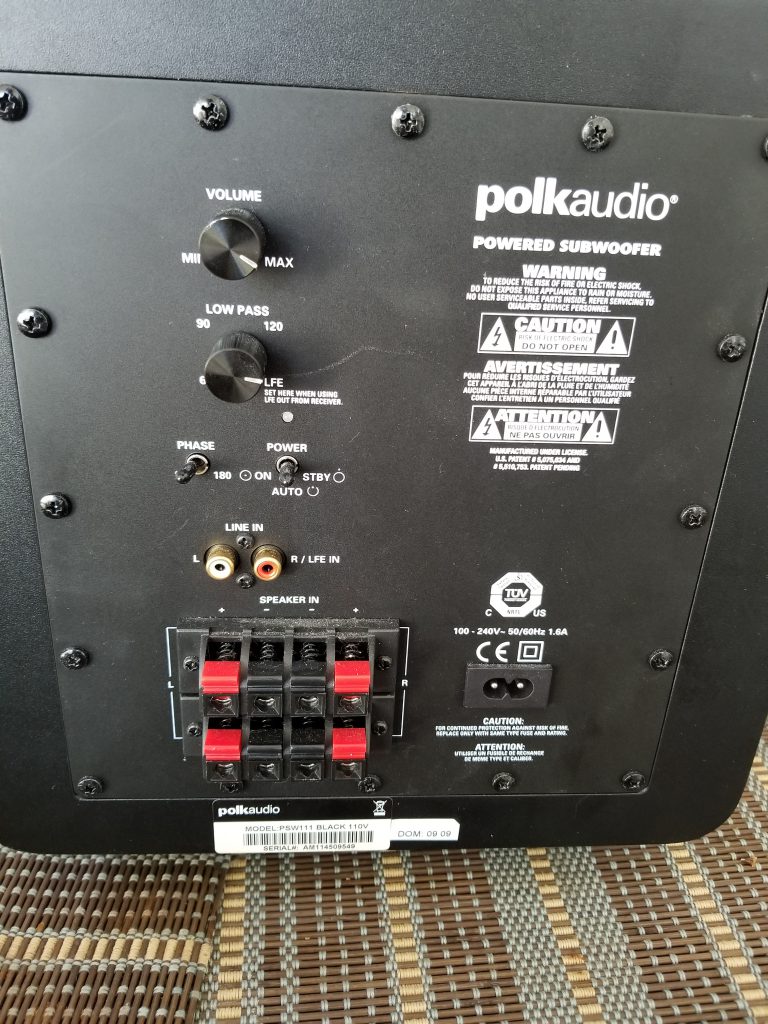 It has a volume knob which let’s you adjust to your personal liking ( although I personally recommend setting it halfway; anything over that I noticed started to seem somewhat distorted)

There’s a phase switch present as well which like the name suggests, changes the phase of the subwoofer. This would only be useful if you setup your subwoofer on the opposite side that your speakers sat; otherwise don’t worry about that setting.

The power switch which is for turning it on and off. Then it has LFE in and speaker in (though again you’d connect those to the receiver ideally.)

What’s particularly cool about this subwoofer is that it comes with what’s known as smart amplifiers. Now a quality amplifier is an absolute necessity when it comes to good sound; as this is arguably the biggest factor that will determine how loud the sub can go. More about that here. http://www.explainthatstuff.com/amplifiers.html

Basically what you need to know is that those allow it to consume energy only when it needs to rather than being constantly on; and when it is on, it uses very little in total. This low power consumption should technically help you save on your electric bill which is a pretty awesome little bonus.

By the way, from me to you, keep in mind that specifications are just numbers. While they can give you an idea of how something may sound, by no means is that the entire story. It may sound worlds different than the specs suggest so just remember that.

As far as setup is concerned, it was relatively simple. I turned it on with the switch on the back, and set the gain at half. I used an optimizer mic with my receiver to calibrate it then did the subwoofer crawl. Pretty straightforward. It didn’t take up a lot of space so that’s a plus.

By the way, the receiver I used for this review if you’re curious, was one I had bought a few months prior; it’s apparently discontinued now though. The one listed below is the newer version.

Here’s the part you really want to know, how does it sound? Well I started off the same way I do with any new speaker I get, music! I like to try different genres just to see how versatile the the sub/speaker is. 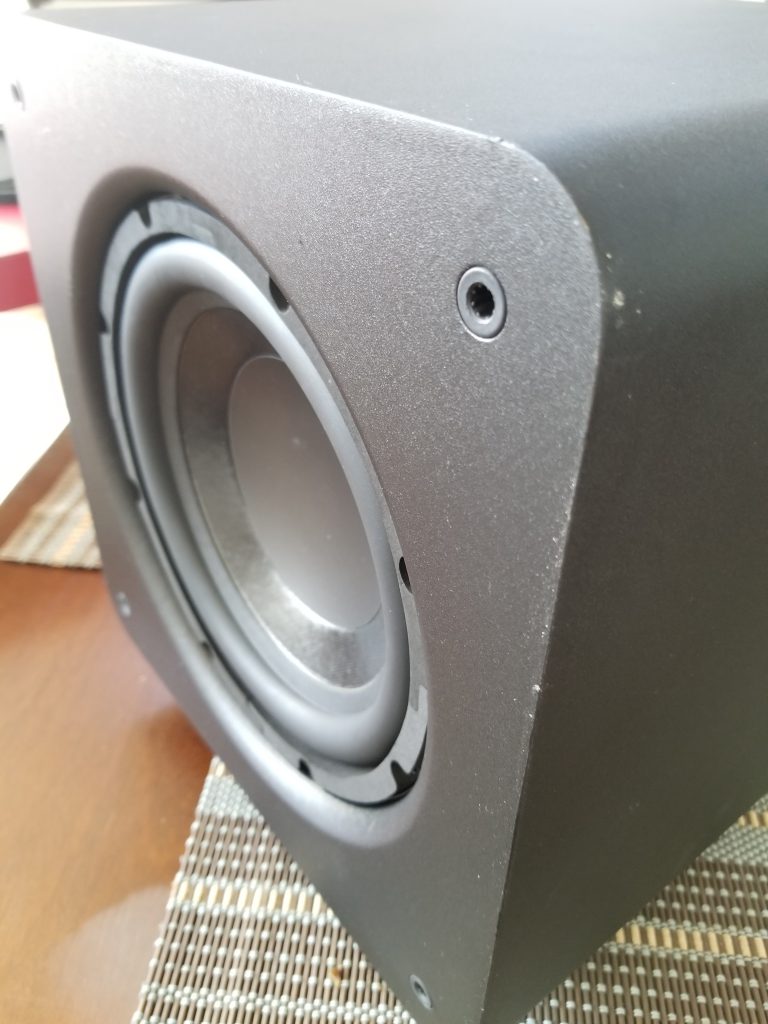 Took me by shock when about 10 seconds in the kick drum kicked in. The bass from this little thing was so pronounced and authoritative.

It was the kind of bass that made you want to nod your head along with it. It almost sounded like somebody physically punching something if anything.

So now I had an idea of how it did in that genre, next I wanted to try R&B so I played Impatient by Jerimih.

Wow does this thing hit. Mind you I’ve heard subwoofers that admittedly dug deeper, but definitely not at the size.

The PSW111 definitely had that punch with bass that you can feel. It just sounded so good; better than I was expecting that’s for sure.

So to really test its mettle in the music department I decided to play Spaceman by Hardwell. Talk about a party. It let out a visceral thump with each bass hit that pretty much let you know it wasn’t playing around.

I’d call this the little sub that could because man does the sound belie its initial stout appearance. It did not disappoint what so ever.

However I wasn’t done and at that point it was time to watch a movie.

So the movie I really wanted to try with this sub was one of my favorite movies, the Dark Knight (the first one) I’m not one to spoil movies though, so what I will say about my experience with that was it was definitely fun.

What I did happen to notice during the movie, was that you could tell when it wanted to go deeper like some of the bigger subs but couldn’t quite. But I wouldn’t necessarily fault it for that since you do have to tamper expectations on a sub that’s only 8 inches.

It’s not going to shake the walls down like a 15 inch goliath, but it gets the job done; and well at that. But on the more eventful scenes with dramatic musical scores, it was certainly convincing.

The best way to sum up the sound of the PSW111 is punchy and clean sounding with respectable, but not groundbreaking extension into the lower notes.

Some subwoofers often have the issue of having a little too much rumble in turn sounding muddy, but this did not have that issue what so ever. It knows what it can and can’t do; and with what it can, it executes phenomenally.

Now I did have a few dislikes, but even these are minor. 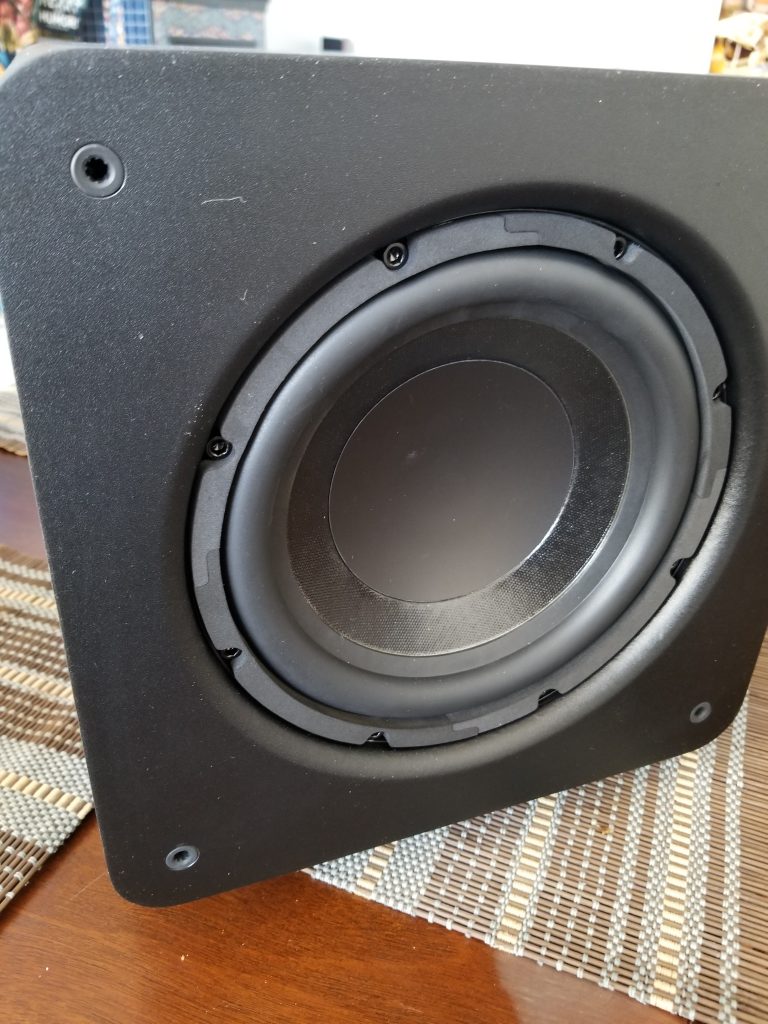 Besides those two very slight criticisms, this is an excellent sub that overall does not disappoint. It does movies and music beautifully, and when turned up loud, there’s no distortion to be found anywhere.

If you have a smaller room, dorm, apartment or whatever, the Polk PSW11 will work great.

It’s certainly one of my favorites because of how compact yet powerful it is. It’s really awesome.

This has been the Polk Audio PSW111 subwoofer review, hope you enjoyed it. If you have any questions at all feel free to ask. Catch you all next time. ?