As much as I love a good subwoofer, all that bass is useless if the speakers that accompany it lack clarity and finesse.

There’s just something about a speaker being clear that really engages you (if anything even sometimes scaring you) It’s hard to explain, but for lack of a better term, it’s awesome.

So on my never ending quest for good sound, I stumbled upon a rather interesting duo. That pair was the Polk Audio RTI A3s.

Funny story though; I ordered these along with a bunch of other stuff at the time completely unaware how big the boxes would be.

This was the first time I actually had a delivery driver ask for help with carrying stuff.

I was confused at first, but one look and I instantly knew why.

They were pretty massive lol.

So we then struggled with these gigantic boxes up the flight of stairs into my house.

You know in retrospect, it’s hilarious to think about, but at the time it was a struggle. I’m glad no one saw.

We both laughed about it though, and after he left, it dawned on me that I had another flight to carry them up because the room they were going in was…..guess where…upstairs!

So that was definitely fun to do. Nope not even a little bit sarcastic. 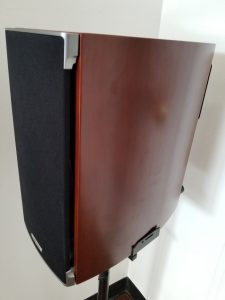 Alas, the RTIs in cherry wood are part of my current system right now though.

After setting them up, and from what I’ve listened, they’re a real winner.

This is the Polk Audio RTI A3 review. 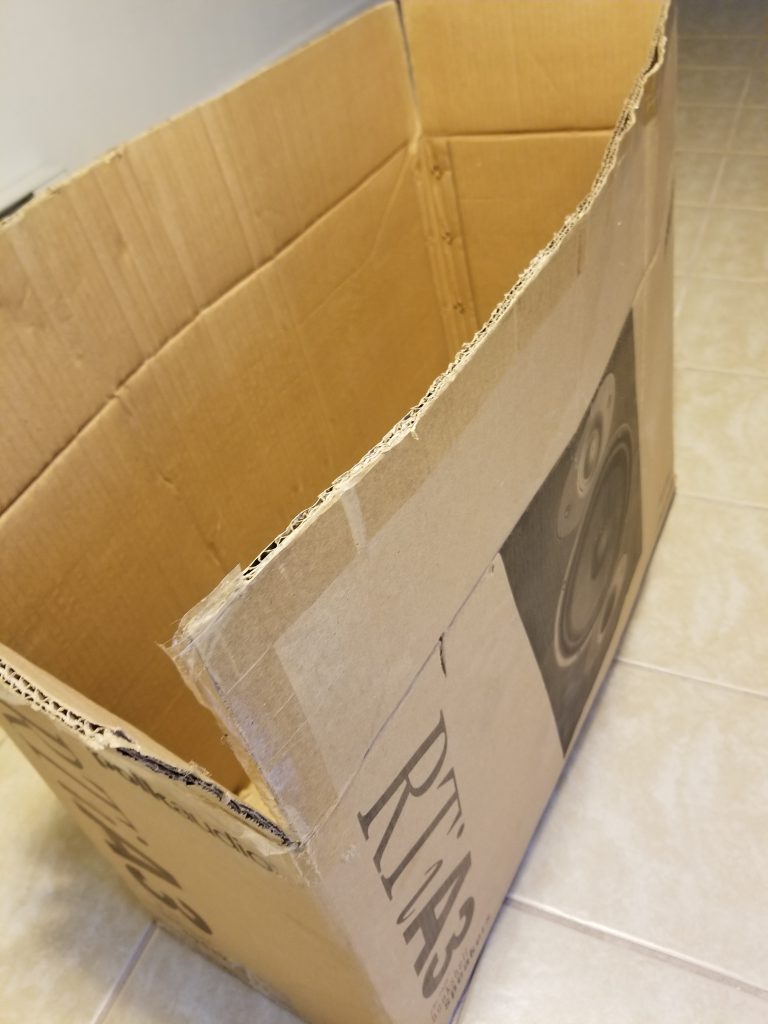 So first things first, right off the bat, the box was comically big. Yes, it was also somewhat heavy, but it’s the size where you’ll probably need two people for.

There wasn’t any special coloring or even anything particularly alluring about the box design itself though; just a normal cardboard box.

That’s okay because we care about what’s on the inside of the box.

You could see the speakers on the outside so that’s a cool touch. Inside there’s foam liners around the RTIs so they don’t get damaged in transit.

Glad that they did that because the last thing anyone needs is the contents of their package broken. On top is a plastic Ziploc full of manuals and stuff like that if you want to read it. I personally skim it since I’m a nerd, but that’s your call.

Anyway when you pull one of the foam liners off the top, you’ll see the speakers thoughtfully wrapped in a plastic covering. As a side note; I like the extent they went to, to make sure that any cosmetic damage doesn’t occur. But do be careful pulling them out.

Take this from someone who managed to drop their brand-new speaker straight onto hardwood immediately from the box. I’d suggest doing it on carpet if you can JUST in case, but chances are you’re likely much less accident prone than I am. :'( *sheds tear*

My immediate reaction to seeing the speaker itself for the first time was a mixture of admiration and shock. Aesthetically, these things are downright beautiful, especially in cherry wood. You can tell it’s quality just from how it looks.

The grill has a logo on the bottom in silver and I really liked that. The speaker as a whole, has an unusual tear drop shape that apparently is a signature thing from Polk. This unique shape allows for quite a few acoustic advantages compared to the traditional design; such as reductions in cabinet resonance and increased output.

On top of that, it just looks cool. The one thing I noticed though, just from my short time with it, (at the time) was that it picked up fingerprints really easily. 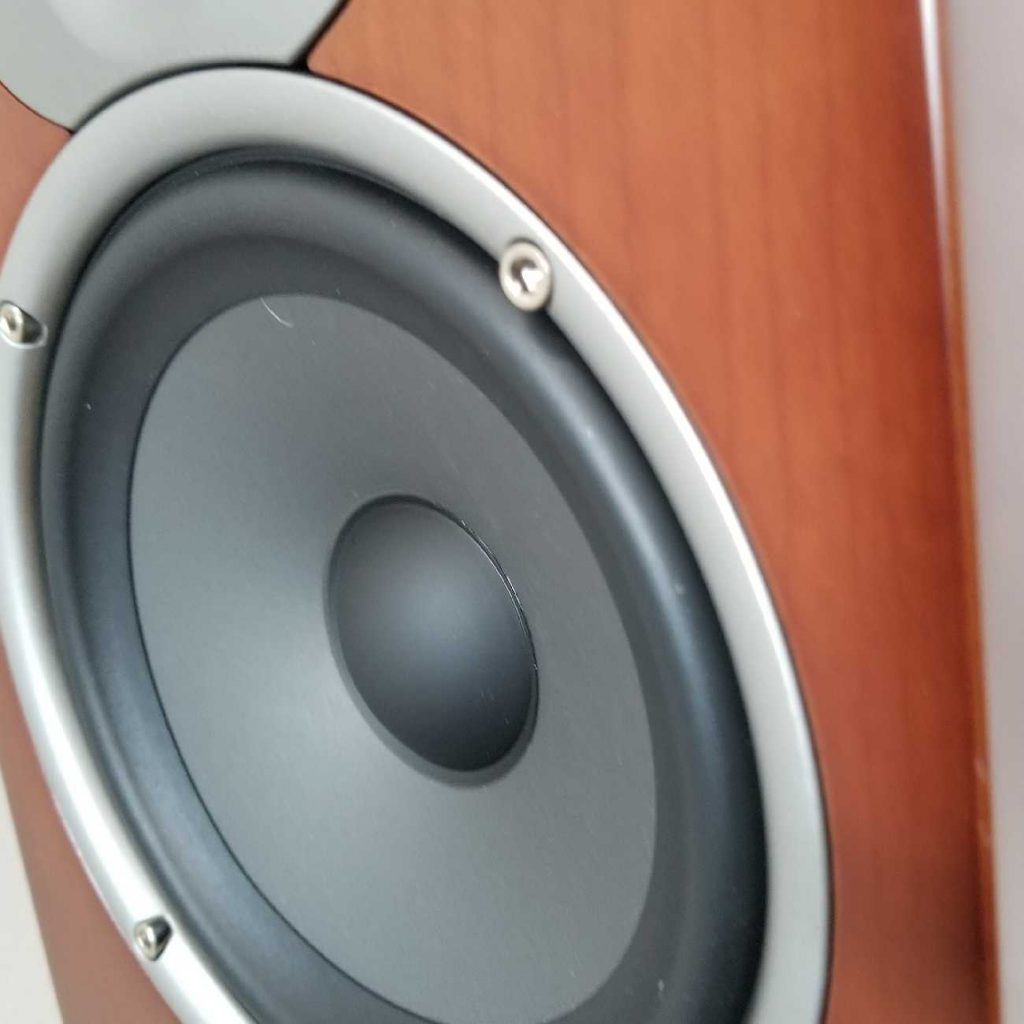 So you may have to use a cloth to wipe them down after setting them up. Overall though, first impression was that these things are gorgeous in person. But the other thing I definitely noticed, which was kind of hard to miss, was the impressive size of them as well (I’m sensing a theme here)

They certainly are quite large so you will need some space for these.

Well they’re 14.2 inches high, 14.8 inches deep, and 7.8 inches wide, per the official spec sheet. They also are 16 pounds each. Yeah definitely heavy so putting them on a flimsy shelf or something similar would be a hazard.

Taking a look at what’s offered under the hood, you’ll definitely appreciate that they come with what’s called a silk dome tweeter

The tweeter is the thing responsible for higher notes you hear, and the type implemented in a speaker can influence how it sounds. I personally prefer silk dome, because to my ears, it doesn’t sound harsh or sibilant.

The one here is 1 inch, which is a respectable size. It also houses a 6.5 inch driver, which would explain the size at least.

These can also be wall mounted, which is something I think a lot of people will appreciate.

Another cool feature they have is a port on the back of the speaker as well. Similar to how a ported subwoofer would work, air is moved when the speaker cone moves, so normally a good speaker would have at least one port. This one has one in the back as well. The reason is it reduces something called port chuffing.

Simply put, chuffing is when the air interacts with the port creating additional unwanted noise. A good port is usually able to reduce this, but by having two ports, that just means an all-around cleaner sounding speaker. So big thumbs up to that.

The RTI’s have a sensitivity of 89 DB as well. Sensitivity is how much output a speaker will have given a certain amount of power. The higher the sensitivity, the more power it will put out so at 89, that’s about normal. 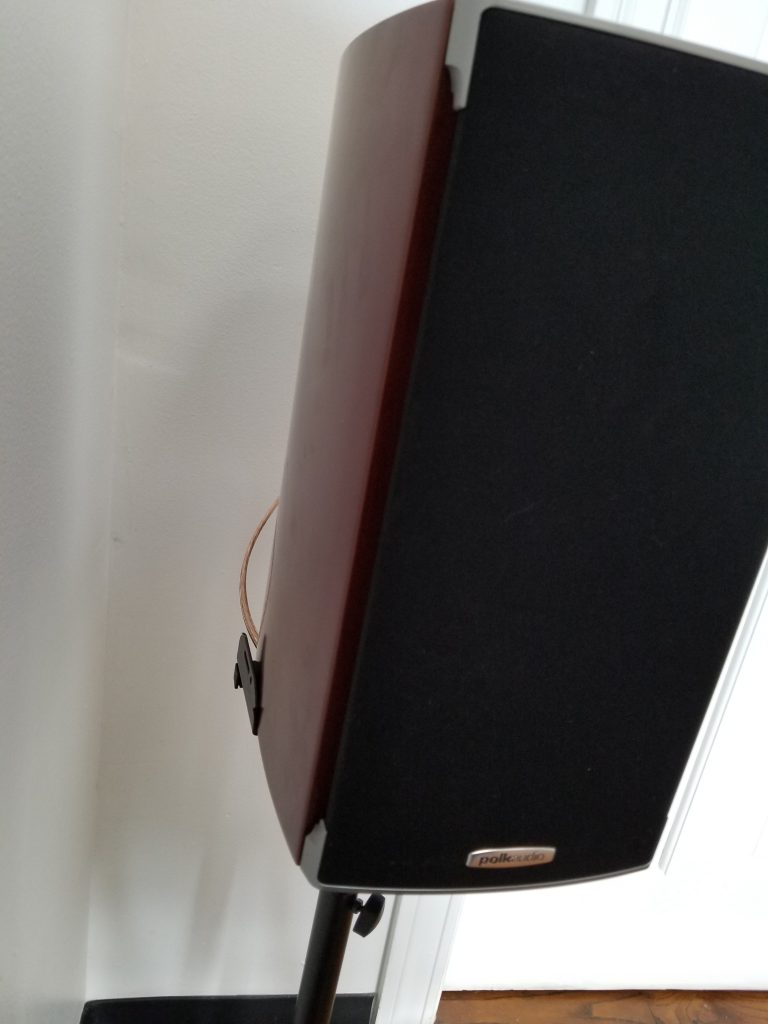 The setup for them was just like any other speaker. Attach the wire to the connectors, then insert those into the speaker.

They have 5-way binding posts, which basically means it’ll take any kind of connection you prefer so that’s awesome.

But yeah, not too much trouble in the way of setup. It’s pretty standard.

I did put them on speaker stands since I prefer my speakers that way.

What you want to keep in mind with stands however is the amount of weight they can support. If they can’t support enough weight, they’ll topple.

These are the ones that I use though that support up to 30 pounds each.

You don’t “need” a stand per say, but the reason people use them is that it decouples the speaker from the surface it’s sitting on.

That results in a purer sound, since the surface it’s placed on influences the sound exuded to a certain degree. It also looks more professional. I’m using that stand in the pic by the way, so that’s what they would look like with it

But with them all setup, of course I was ready to see how these bad boys sound. Let’s just say the Polks did not disappoint.

The way I test bookshelf and tower speakers is interesting. I’ll unplug my surrounds, subwoofer, and center, leaving only the left and right plugged in.

The logic behind that is I want to see exactly how good the speaker is without any other interacting factors. It’s the easiest way to test quality.

So with the both of them tuned in, it was time to see what’s what. First thing I tested with was, you guessed it, music. I had heard beforehand that they were really dynamic and that would be an accurate assessment.

When I ran the song Our Story by Mako through them, I was floored with how exceptional they sounded. It was such a spacious and articulate sound. Every little nuance and detail was audible, and I even heard things I hadn’t previously.

For something so big, I definitely didn’t think they would sound as detailed as they did. I was curious to see how they would sound with Hip Hop though. I tried the song Darkside by Kiara. Here’s the interesting thing I noticed, these things have bass! 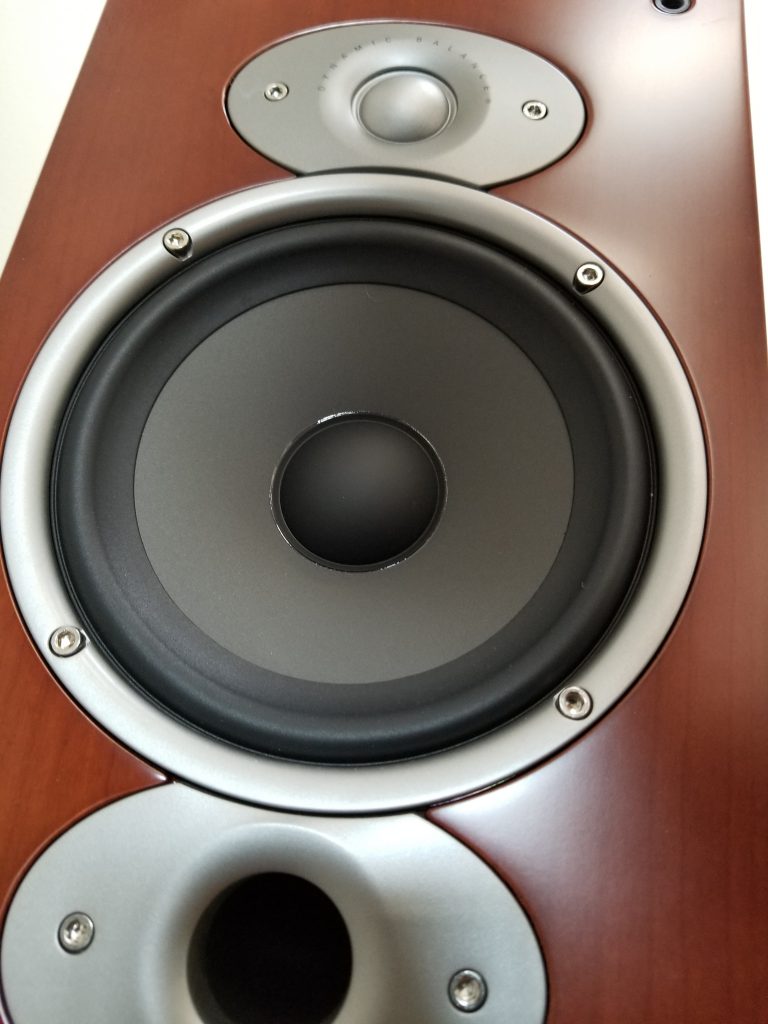 Since the cabinet of the RTI A3 is so big, apparently an indirect benefit of this is the capability of lower extension. I made sure my subwoofer was off, but sure enough, the Polks were outputting some serious degree of bass. Honestly, I wasn’t prepared for that.

Of course it wasn’t as much as a dedicated subwoofer would produce, but to even be mentioning bass in a normal speaker is crazy in of itself.

As for the sound signature, they sounded warm but concise if anything. Every note was tonally smooth/relaxed, but it certainly maintained its composure without sounding muddy or anything like that. The speakers themselves produced a satisfying kick with each note.

When pushed to higher volumes, there was no sign of distortion to speak of. The main thing with these speakers is they have a perfect balance of being very clear but still having enough authority to bump when they need to.

If anything, I’d say the louder they got, the clearer they were surprisingly enough. I’d definitely say you’re in your element here if your primary focus was stereo sound. As far as movies are concerned, I watched 2 with them; Guardians Of The Galaxy, and Spiderman Homecoming. Not surprisingly, they didn’t falter one bit. Truthfully, they sounded phenomenal really. 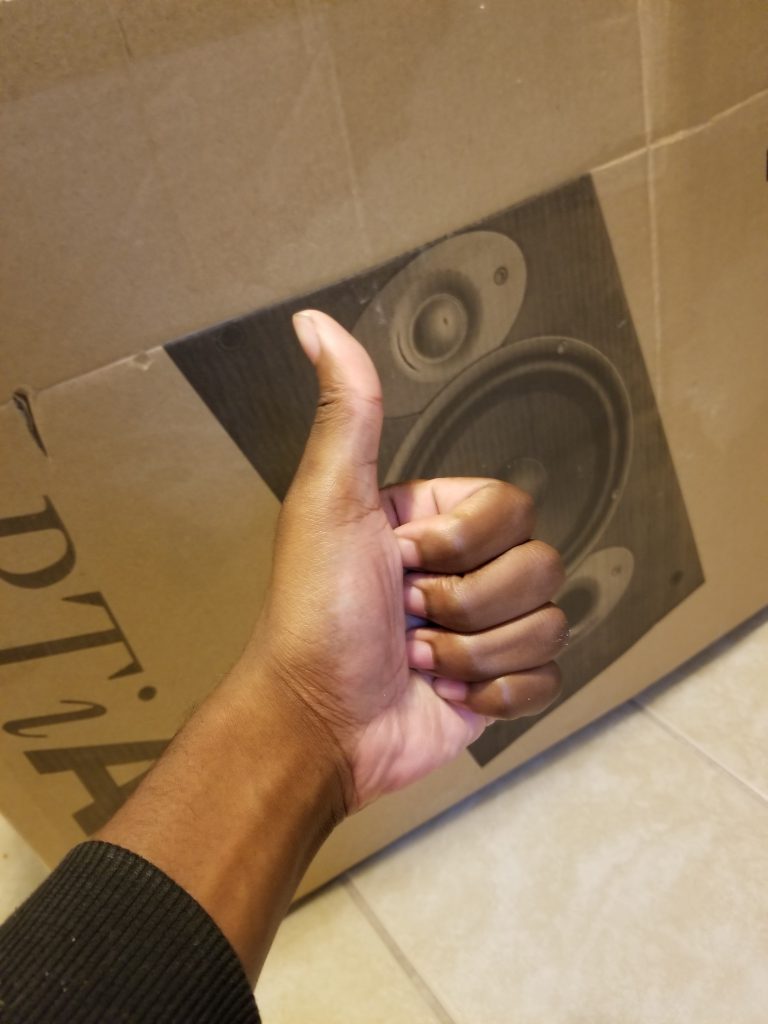 Overall the Polk RTI A3 is a fantastic bookshelf speaker; one of the best I’ve ever tested honestly. Between the clarity offered with media, and the general aesthetic they provide, it’s nearly impossible to go wrong with these.

They work with anything you can throw at them. Definitely 2 thumbs up. I highly recommend them.