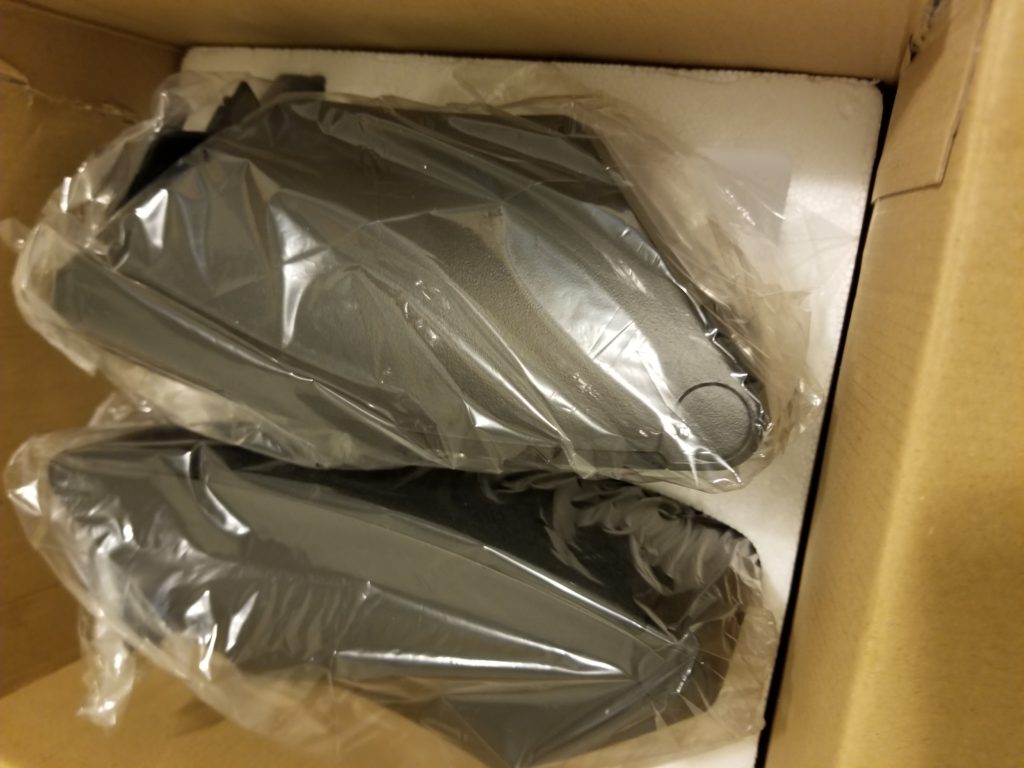 Hey how’s it going everybody?

Today we’ll be taking a look at a recent addition of mine. More specifically, this is the Polk Audio OWM3 wall speakers review.

It’s definitely an interesting pair of speaker that’s for sure.

But is it any good?

Well let’s just say I use to have issues hearing my surround speakers, but after using these for a while, that issue is completely gone. It’s changed my listening experience entirely. 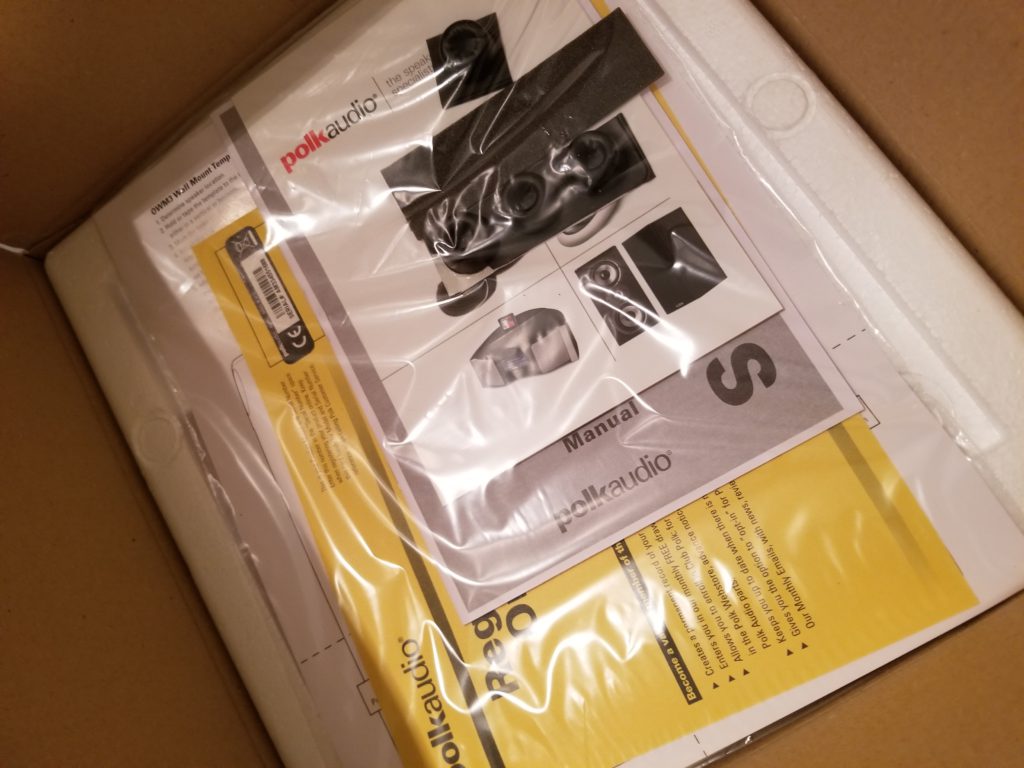 So when you first open up the box, you’ll immediately notice a bunch of stuff on top. This includes information regarding the warranty, a little setup guide, a pamphlet detailing the different orientations that the speaker can be set, and adhesive bumpers.

I think the fact that they took the time to include a booklet that shows all the different ways it can be set is definitely a cool addition because someone might not be initially aware that it’s capable of being positioned that way.

Then under the styrofoam inserts, you have the speakers sitting in their own little space while being wrapped in plastic.

It’s definitely a nice touch because even if your box gets damaged in transit, the amount of protection that they have here means the speaker itself should be fine.

I will say though that the styrofoam is a little hard to get out, so just be aware of that.

As for the box itself, it shows a picture of the speakers along with a few diagrams of the different ways it can placed along the sides which is a pretty cool touch.

Now when you take the speakers out themselves, you’ll notice that they don’t feel too heavy and are actually pretty compact themselves.

I’m not exactly sure what shape you would call it, but they definitely have an interesting shape; with a rectangular front, and somewhat curved back that goes inward.

But this is done for a specific reason that we’ll touch upon in a second.

The material is a hard matte plastic that has a very slight texture to it that feels nice. There’s a removable grill as well for those of you that like to visibly see the drivers.

Speaking of which, there’s 2 here; a midbass driver in the middle, with a soft dome tweeter right above it. It’s a simple but attractive design.

Along the bottom there’s also the subdued Polk branding debossed in black. I personally got mine in black, but they also come in white as well. 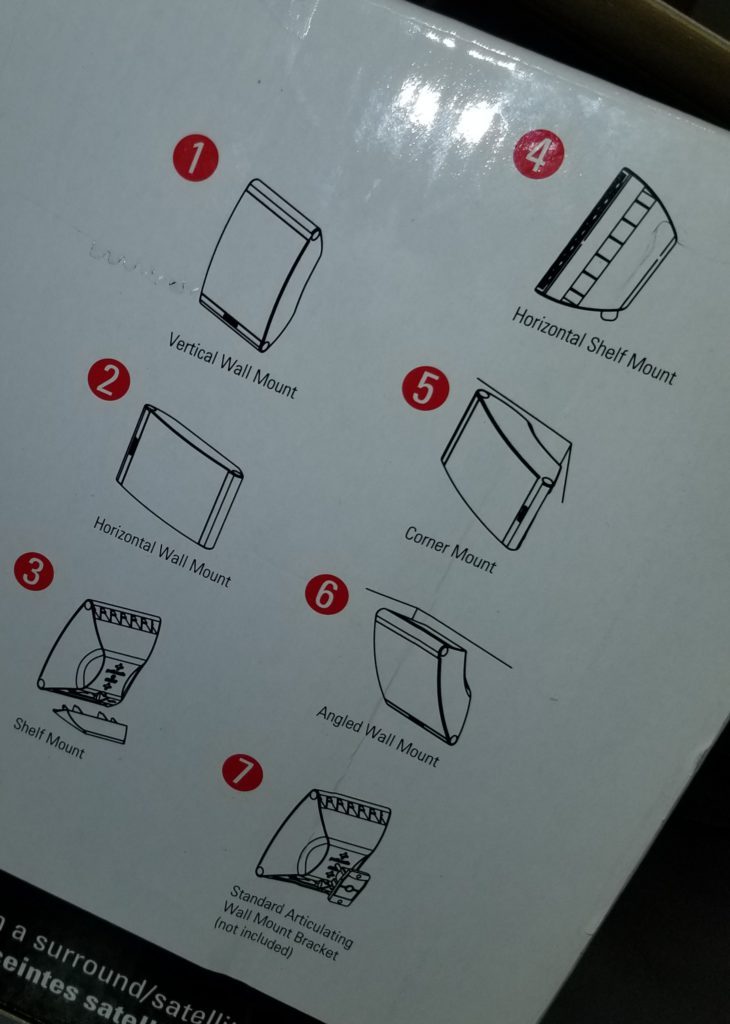 So the particularly interesting thing about this speaker, if you remember me mentioning this before, is that it can be oriented in just about any way you can think of.

What do I mean by that?

Well basically it can be positioned anywhere you need it to be in pretty much any position. So let’s say you have an abnormal wall where one side is flat, but it angles out to an island or something like that.

With a normal speaker you’d probably have difficulty finding a good spot for it. But with the OWM3, you can place it lengthwise, width wise, or heck, even along that corner without a problem.

In fact, there’s about 7 different ways it can be placed. That means you’re guaranteed to at least find one that best fits your current setup. It even features a shelf mount that cradles the speaker and allows it to sit upright if you didn’t want to hang it on the wall.

On the specifications side of things, you have a 4 ½ inch dynamic composite cone driver that is lightweight but remains stiff which allows it to play at high volumes without distorting. The 1 inch fabric dome tweeter included also allows it to nail those high notes as well.

What’s really great is the fact there’s 5 way binding posts included, which allows you to wire them however you want to be it via banana plugs, pin plugs, etc. It has an acoustic suspension enclosure and what Polk calls Capacitive Coupling Bass Technology for a deeper bass.

In terms of their actual size, they come in at 7 inches wide, 10 inches height wise, and about 4 1/8 inches deep which is pretty slim. That’s done to aid in wall mounting so they don’t stick out too much if you decide to position them a different way.

You also get a 5 year warranty, so no worries about them giving up on you. It also happens to be timbre matched, meaning it’ll sound good with any speaker within the Polk line. What’s crazy though is the weight of these things.

They’re surprisingly only 4 pounds each, so you won’t have to worry about the speaker falling or anything like that which is always good.

Oh and almost forgot, on the back, there’s even two cross shaped key holes for the speaker to rest on if you should decide to wall mount it differently.

Now like I alluded to before, how you set yours up will likely differ from mine, but due to the fact I myself have an abnormal room, I had to wall mount mine on 2 small columns. But the setup itself was simple.

All I had to do was put a screw on the two columns then align it so that the screw went into the keyhole which allowed it to comfortably rest against the wall. This was after I wired it with pin plugs since you’ll have to run the wire sideways if you want the speaker flush with the wall.

But other than that it was relatively straightforward. 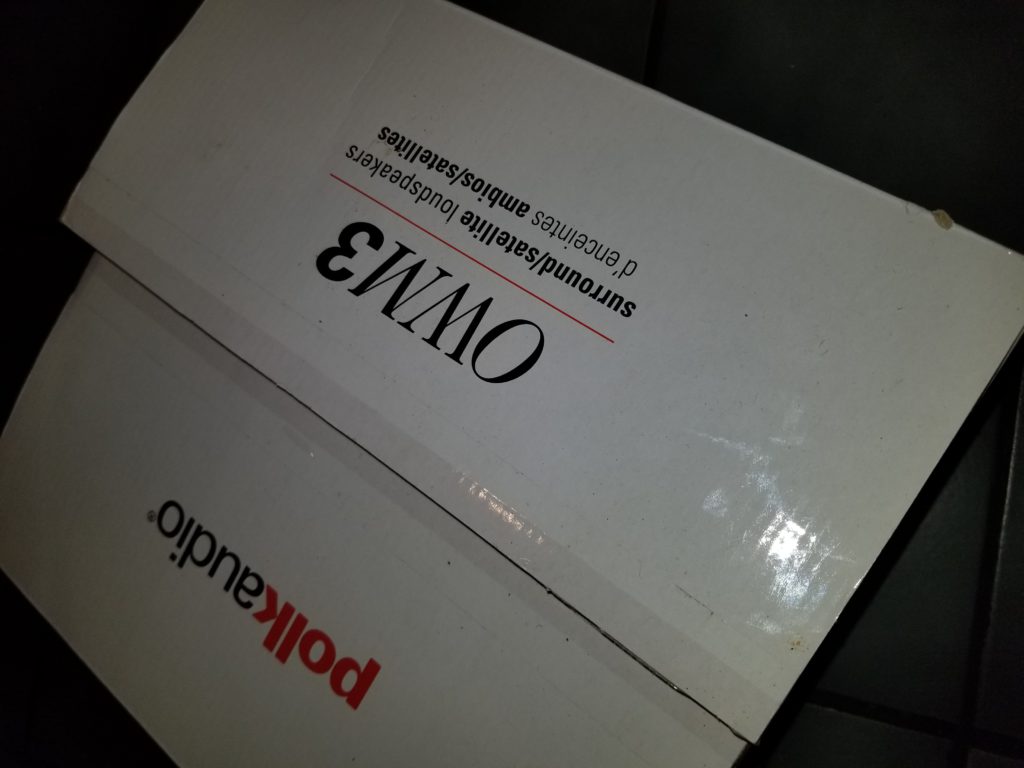 So the main thing you’re probably curious about is how does it sound?

Good, depending on what you’re using them for. I tried them as front speakers just to see how they faired and to be honest, it did leave a little to be desired.

Yeah the upper ranges were clear, and sound effects were decent, but at higher volumes it sounded ever so slightly sibilant if I’m to be honest. Despite the claim that they handle bass well, in my own personal experience it wasn’t as impressive as a few previous speakers that I’ve tried (one that’s a part of my current setup actually)

This is probably due to the fact that the lower frequency range listed is 100 Hz when ideally, you’ll want a speaker that can handle at the very least 80 so that the subwoofer can take over from there.

That is, however, if we’re talking about a front speaker.

When I used them as surrounds, sound effects to the sides and back (ordered another pair for rear surrounds) were enveloping and engaging, providing an experience that seemed to be completely different than when I tried to use them as fronts.

It was very surprising to say the least.

It certainly changed my movie experience because sound effects from whatever content was on screen, be it video games or movies, was detailed and nuanced, but was loud enough to actually create enough of a difference to appreciate.

It actually created the effect of REAL surround sound.

My issue a lot of times is that with some speakers with surround sound content, there isn’t a huge enough difference to really even notice it, but with these speakers, for some reason they engage you like no other.

I mean it’s hilarious when you have guests over, and during a movie they look to the side or behind them because they think they heard something there. That’s how you know they’re doing a good job.

Basically, I say that to say this; if you’re looking for a great surround speaker that’s extremely versatile, then this is without a doubt a great choice to go with.

Get these with the intentions of using them as surround speakers and you’ll love them.

Overall, there’s not much to dislike about the Polk OWM3, but there’s a whole lot that you certainly will like; and that is definitely the draw here.

What you get here is a fantastic surround speaker, and one that actually gets loud despite its small size. To summarize, it’s definitely worth it, and is currently a part of my own sound system which says a lot.

If you’ve been looking for an awesome surround speaker that’ll actually make a difference, then this one is a solid choice.